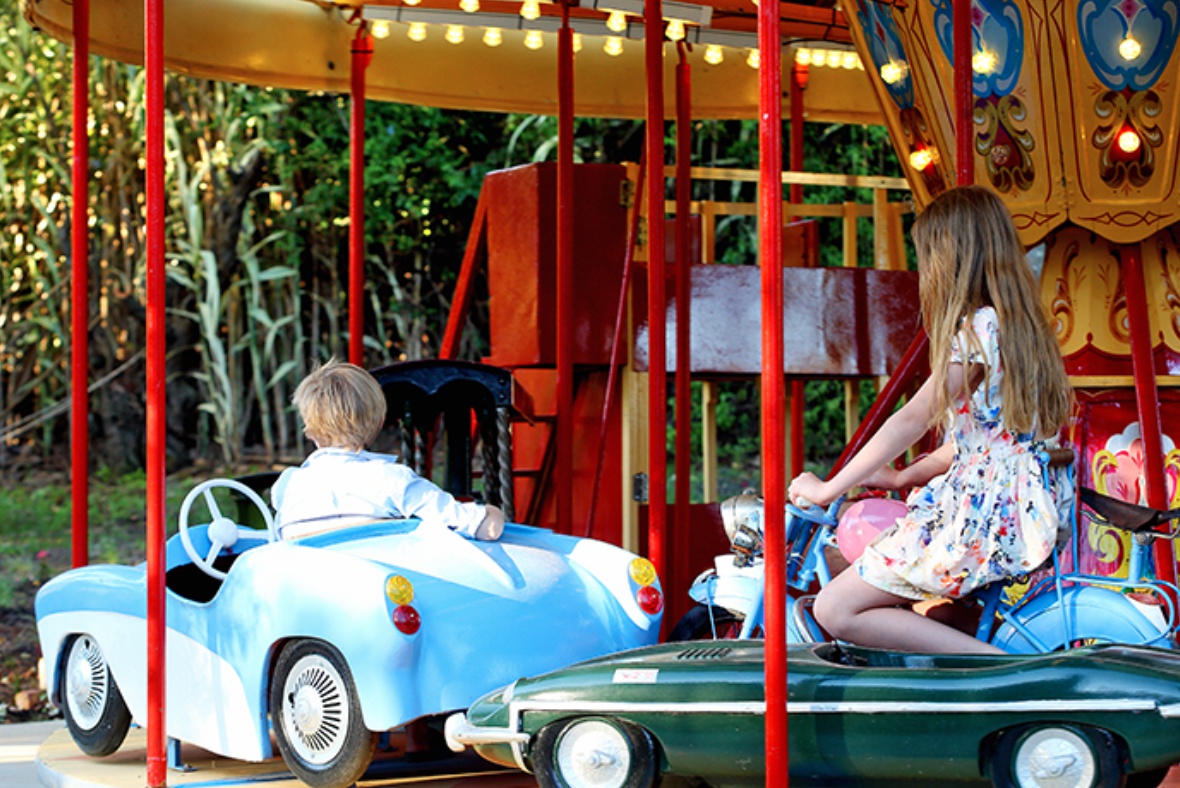 In a first for Africa, an original fairground Coulson Carousel has been restored and now lives on the grounds at Le Grand Jardin.

In a celebration of life’s joyful wonderment, Le Grand Jardin has imported an original fairground carousel from England to evoke even more family fun at its inspiring Stellenbosch winelands property, a signature villa of the Wonderland Escapes portfolio. The 1940s Coulson Carousel is believed to be the only one of its kind in Africa.

Named after its original craftsman, FW Coulson, the carousel has been carefully restored by George Hebborn, one of England’s most renowned fairground painters and part of the famous family of Hebborns who run funfairs across England. The carousel, which is more than 70 years old, travelled to amusement parks along the British south coast in its heyday – from Brighton to Eastbourne and Hastings – and still sports many of the original elements handcrafted onto it. The traction and fire engines, buses, train, motorbike, jeep and horses were all part of the 1940s design. A Jaguar E-Type, Triumph TR3 and rocket made their appearance in the early 1960s, during a renovation of the rotating structure, and the Triang is the same car as the one Prince Charles had as a child.

The Coulson Carousel forms part of a legacy of carousels that have existed since the early 19th century, when such structures were first built as simple, crude constructions with stick-leg horses, and needed to be turned manually by ponies, or children who worked for showmen in exchange for free rides. The introduction of steam power opened up the possibilities of faster movement, but it was electricity that really allowed carousels to function at their peak.

FW Coulson was established by husband-and-wife team Cyril and Joan Coulson shortly after the second World War. The couple worked from an elaborate old chapel, which had also existed as a school in Coltsgate Hill in Ripon, England. Here, they produced an assortment of funfair rides, manufacturing, painting and assembling everything on the property with a staff of 20. Cyril designed on scraps of paper, working from intuition, turning every piece into a unique work of sculptural art, while Joan, a self-taught artist, painted the rides herself. In 1951, Cyril died in a car accident while marketing his business in London at the Festival of Britain, and the company closed down soon after, making original Coulson funfair rides prized possessions.

The carousel is fully functional with lights and music.
“The life story of the Coulsons’ passion for carousels, and their wish to bring others joy after the war reminds us that life and creativity are worth celebrating,” says Le Grand Jardin proprietor Bernard Fontannaz, who searched widely for the carousel, to offer it as a gift to his family, and an attraction for visitors to the luxury property.

“The Coulson Carousel at Le Grand Jardin is fully operational, with lightbulbs that add illuminated charm when night draws in,” says his wife, Sue Fontannaz. “It’s our pleasure to share this experience with our guests. We wish for them to delight in the old-world nostalgia that allows them to switch off from their daily lives and immerse themselves in a spot of marvel and magic while staying at our peaceful winelands property.

The beautiful Le Jardin estate in Stellenbosch.
“Le Grand Jardin is an invitation to escape reality for a while and celebrate a sense of childlike adventure,” she says of the estate’s eclectic manor house and oak-filled garden in which beaded Alice in Wonderland creatures form part of a treasure hunt that winds around the natural dam and eco-pool.

“The carousel, which was built in an era when funfairs travelled from city to city, offering joy and enchantment to children and adults alike, seemed the perfect addition to the wonderland escape we’ve been creating as part of the extensive revamp of the property.”